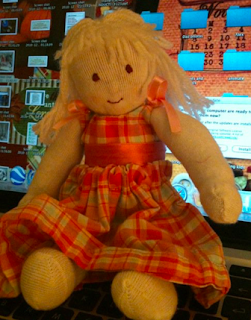 I've been wanting to make a Princess and the Pea play set for a long time now yesterday deciding to finally get to it, even purchasing a cute princess bag from accessorise to house the princess and her mattresses. But the thing is now I've made her I don't think I can bear to put her in a bag, think I'll have to make another princess maybe. So I am still at square one with the princess and pea project maybe sometime later in 2011.
Here are the basic stages of making the doll.
You will need: A pair of socks, stuffing, strong thread, needle, wool, the foot of a pair of tights. 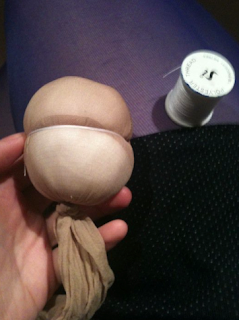 Gather a ball of stuffing and create a very round ball, stuff inside the toe of a stocking/ tights, tie a knot in the tights at the bottom of the ball. To form a more realistic shaped head, as I am beginning here follow detailed instructions at the Silver Moon 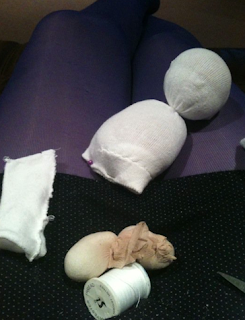 Once the head is moulded in the stocking, stuff it into the toe of a sock wrapping cotton around the base of the head (do not tie, you will redo this later.) Cut the sock to the correct length to become the doll's body. Create two oval shaped spheres an appropriate size for feet, encasing into a piece of stocking fabric and tying it at the place the the ankle will be. Cut the foot off the other sock just before the bend of the heal. Cut this in half length ways. Turn theses pieces inside out and sew up the long edge, then turn the correct way. 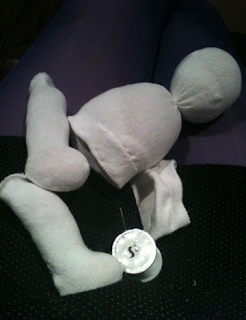 Stuff the foot into the base of the tube you have just sewn, manipulating it to make the heal at the seam (this way it will create a realistic foot shape, due to the sock's shape. Stuff then leg with a generous sausage of stuffing. Sew up the opening, first folding the tops in a couple of mm to create a clean join. Attach the legs to the body by pinning them inside the join of the body (folding the edge of the fabric inwards about 2 mm to create a clean seam). Sew the edge up with legs joined using a fine blanket stitch.

Cut the remaining part of the sock used for the legs the correct length to create arms as in the diagram above. Arms of dolls seem to be a little shorter than realistic arms, they should come a tad below the join of the body to legs. Continue the process as for legs for arms, except create balls for hands. 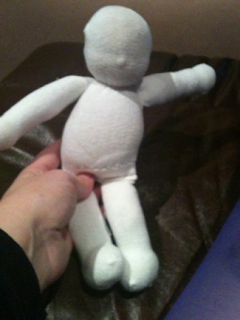 Attach the arms to the body at the appropriate place.
Continued tomorrow....
Posted by alljoinin at 15:20